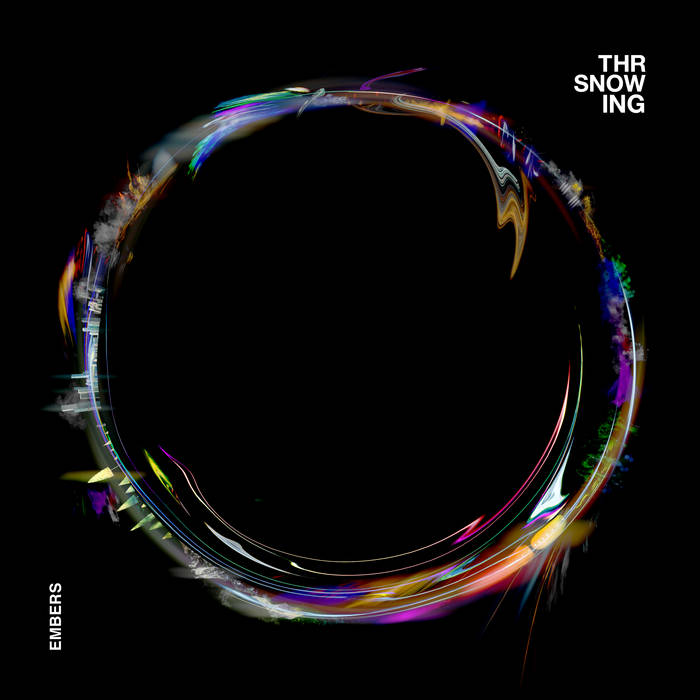 Will Ormshaw The album flows together really well, and while it's not as ambient as a lot of other stuff out there, the album still creates a really strong sense of place and emotion. Favorite track: Ruins.

HÀSÉNÀRÚ Wow, just wow! The use of the sounds/effects on the entire album are just so good. This records doesn't get bored at all! Favorite track: Klaxon.

‘Embers’, the new album from Ross Tones aka Throwing Snow, is a conceptually imaginative and musically atmospheric recording that draws stimulus from laws and patterns of the natural world. Excelling creatively from the freedom and restrictions of applying aspects of these elements, ‘Embers emerges vividly from the processes employed in its creation.

“Our complex world arises from fundamental laws. These laws constantly sculpt and shape our surroundings through repeating cycles, forever moving forward. Cycles interact with each other, endlessly morphing an interconnected landscape. Viewed over longer periods of time seemingly static objects like mountains ebb and flow like water, and yet over the same time frame countless lives appear like waves oscillating in a blink of an eye.” ~ Throwing Snow

Recorded in Daddry Shield, County Durham, sounds captured in the surrounding area became part of the music. Rain is transformed into white noise, at one point a melody line is mimicked by a starling - all the result of endless processes and cycles. The techniques used in creating
‘Embers’ allegorically mirror these processes. Reproducing the way materials are reused in the natural world; tracks are born, live and then die only to be reborn into a new form. All the tracks have similar counterparts whether in structure, dynamics or melodies. Arpeggios self-evolve and are interconnected, randomness introduced utilising two similar pairs of synthesizers so that their cycles are ever changing and naturally evolving.

“There is self-similarity over all scales and time frames, but nothing is exactly repeated because everything has its own life story. We are always at the mercy of entropy, that slow decline into disorder, towards death. It is the process that the delivers the raw material back to the start, allowing new lives to be born. Life comes from the embers of death.” ~ Throwing Snow

Roughly an hour long, the albums start and end appear the same allowing it to cycle endlessly - the vinyl edition has been created so that the listener can mix the album without breaks across two turntables. The album artwork itself is an interpretive score of the music, using another media to view the world from a different angle.

“We are macrocosmic, pattern forming life forms because we have been fine-tuned by evolution to see and hear things in a certain way in order to best survive. We find nature aesthetically pleasing because our minds recognise the complex repeating patterns. Art interprets nature and tries to capture, solidify, use or derive meaning from it in some way. This can be seen in the works of Jackson Pollock with his fractal-esque painting technique, or even in the Japanese concept of Wabi Sabi with its appreciation of transience and love of perfect imperfection.” ~ Throwing Snow

Migrating from England’s northern wilderness to London and now Bristol, Tones schooling in astrophysics didn’t deviate his desire to be musician. Following a prolific run of well-received EPs and singles, his debut
album‘Mosaic’ was released by Houndstooth in 2014.

Live he has supported Bonobo, Atoms For Peace and Jon Hopkins; as well as completing a stint at Red Bull Music Academy and making numerous Boiler Room appearances. Not one to be content with merely making his own music,

Tones is also co-owner of the Left Blank and A Future Without record labels as well as running his own imprint, Snowfall. He also records as Snow Ghosts with vocalist Augustus Ghost and releases music with his brother under the name Vellico.

‘Embers’will be released on 20th January 2017, also presented
as the fabricfirst subscriber CD that month - the first time an artist album has appeared there.

Bandcamp Daily  your guide to the world of Bandcamp

New sounds from Mavi, Ivy Sole & Moderator, plus AJ, the One joins the show, for her latest release